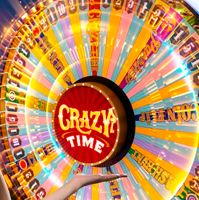 Crazy time is an absolutely unique casino game with real dealers that is created by the Evolution Gaming company. The crazy time was introduced on the show called ICE 2020, which happened recently. It took about a year to develop the project, and there was an open testing before official launch of the game. The testing has shown that gamers are interested in such format which includes innovative technologies.

Developers of the game were inspired by the classic fortune wheel, which is very popular in classic an online casinos. The fortune wheel is considered to be the main part of the gaming process. A whole new studio was created specifically for the game, and it does not have any attributes of the live casino.

There is a huge wheel that looks just like a fortune wheel with a logo placed in the center located right in the middle of a very colorful circus-like room. Crazy time game has a perfect combination of virtual and real world. Some elements of the interface can be adjusted individually in order to make the process of bidding more convenient. Resolution can be adjusted in order to ensure stable performance of the game. This is a useful feature for those who does not have an access to fast Internet or wants to use portable devices for gaming.

Moreover, same features are available on the smart phones and tablets just like on a PC version of the game.

Crazy time is hosted by a professional who is dressed in an appropriate manner. She accepts the bids and stirs the wheel. There is a slot with symbols located above, which starts right after the time for bids is up. Depending on a slot that appeared on the screen(number or bonus), the multiplier is applied to the wheel but only in case if the multiplier and sector are coincidental. If they are not coincidental the game will keep going without bonus multiplier.

Each one out of four available bonuses is a separate mini-game which starts right after a corresponding sector has appeared on the wheel.

Casinos where you can play crazy time

Crazy time has become the most expensive project of the company evolution gaming and includes not only innovative technologies but also a few mini games. The CEO of the company said that the goal of the evolution gaming was to create a game that would make people watch it just like a popular show that is broadcasted on the TV. These are not just words. Crazy time is getting more popular in a very fast pace, even though it was launched just a few months ago. Moreover, a lot of people play it not only to test their fortune and make a few bids, but also to enjoy the fascinating gaming process.