Casanova slot machine from the manufacturer of gaming software Amatic invites everyone to take part in the adventures of a tireless lover. The ardent beauty and romantic atmosphere will make the gameplay as pleasant and interesting as possible. The slot itself was released in 2016.

There are 20 payment lines on the standard-sized playing field, i.e. 5 by 3. Each of them is marked on the periphery with markers of different colors, which is very convenient. The buttons below the reels allow you to adjust the bet size. You can bet from 0.1 to 10 dollars on the spin, which will suit regular players, but not very much like high rollers. Stylistically, the slot does not have a specific direction, but the design is refined. Themed images, love attributes, and appropriate sound – all this makes the gameplay fun.

The design Casanova pokie created by the famous company Amatic is made in contrasting red and blue colors. There is no three-dimensional visualization and detailed elements, but this only adds a certain charm to the slot. The main part of the screen is occupied by the playing field.

Most of the design elements are made in the Venetian style. On the reels you will see a passionate main character, beautiful and loving girls, flowers, a glass of wine, pigeons, a small Cupid, a Venetian mask, a gondola, a bird of Paradise, an image of the night of Venice. Each symbol has its own value.

The percentage of return of the slot is 96.6%, which is quite good. In addition, experienced players know that most games from Amatic have high dispersion, and this game is no exception. In General, the Casanova slot machine is well balanced. There are often winnings that are several times higher than the bet amount, but there are often whole series that do not bring winnings.

You can potentially win a little more than 1,000 bets, but the benefits of playing Casanova slot are not seen in large winnings, but in small amounts issued during a long gaming session. The symbols in this slot are Casanova, three girls, a gondola in Venice, Cupid, a bird, a flower, a glass of wine, a fan and a gift box. Unlike most other slots, there are no classic “card” symbols.

Payouts range from 50 coins, which you can get for glasses of wine, fans, flowers and boxes, to 5000, paid for 5 so called Casanovas. Before starting the game, you should understand its betting system. In Casanova, you can change the number of coins per line, as well as the number of active lines. You can bet from 1 to 100 coins on each line, so this game is perfect for players with any bets.

In Casanova slot, the game is played on 20 winning lines, which will give you a lot of chances to make winning combinations on each spin. To get a payout, you need to catch at least 3 symbols in one of the lines. Pay special attention to the mask – it is the best symbol in this game. 5 of these symbols will bring you 5500 coins.

The bonus features of the slot are represented by several functions. The “wild” symbol represented by the image of the main character will form general combinations, as well as turn into any regular symbol. Sometimes when a “wild” symbol appears, it will fill the entire reel at once. The picture that shows the Golden carnival mask is the scatter symbol here. It will bring a good win for an independent combination, and will also be responsible for launching free spins. 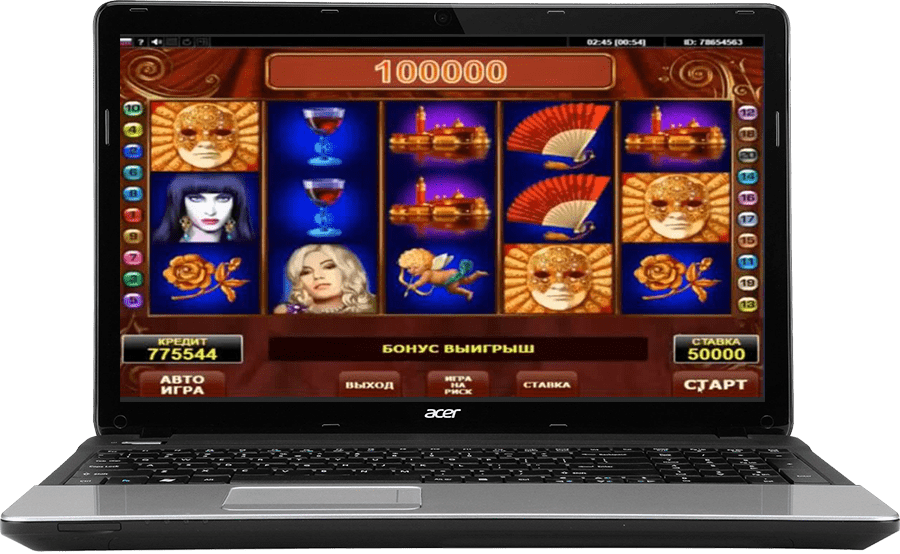 The Casanova slot machine can give out a maximum win of x1000 from the bet on the bonus. To do this, you need to catch the symbols of the main character Casanova on each reel.

Three images of the mask will trigger a bonus round, during which the player will be given 10 free spins with a fixed bet. All the basic rules apply during the bonus game. In addition, the Wild will fill the entire reels, and if three masks fall out, you can get 10 more free spins.

After each winning spin, a risk game for doubling becomes available. The player can try their luck by choosing one of two cards. If the selection matches the card that was selected by the slot, the winnings will double. It is worth noting that this game has some consistency. This means that after spending a lot of time at the slot, you can learn to predict which card to choose.