In 2009, which already seems very far away, NetEnt released the Dead or Alive slot machine. It was destined to become one of the most popular slots about the Wild West. Even ten years after its release, the model arouses public interest.

For the tenth anniversary of the famous gambling game, the studio released an updated version of it. Over the name of the developers didn’t think for a long time: Dead or Alive 2. You will again have to travel through space and time to take alive or dead dangerous bandits who are terrorizing the surrounding area.

The Dead or Alive 2 slot machine boasts an attractive Wild West-style design with themed animation and appropriate musical accompaniment. The background for the playing field is the pre-storm sky above the themed landscape. Everything hints at the approach of lightning – lightning flickers in the sky, the weather vane rotates, and the lantern swings in the wind. The theme is highlighted by different sounds in the background. You can hear the wind howling, birds singing, and dogs barking. 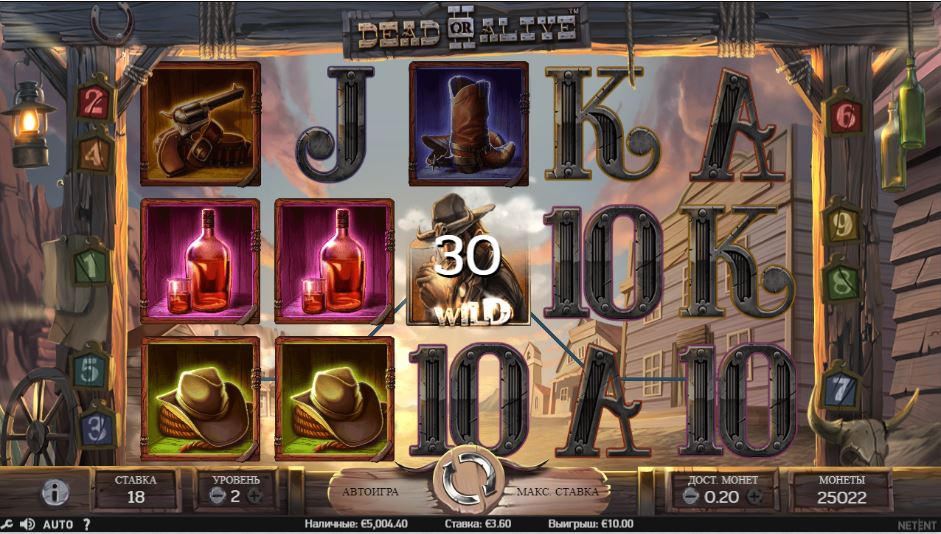 All symbols and other elements of the game are drawn very carefully, and the most profitable symbols are designed in the style of the Wild West. This is one of the simplest games from the NetEnt portfolio, but it’s very well developed.

The navigation panel with the main controls is made in the form of metal parts attached to wooden boards, which conveniently distinguishes it, but does not throw it out of the General style. All the necessary information (number and denomination of coins, current bet, winnings, etc.) is always clearly visible on the screen. With just one click, you can open a panel with advanced settings and volume control, as well as some other settings. In addition, information about the winning lines and the range of bets is available in the slot window.

The set of main symbols of the slot is made in the form of playing cards from ten to ace inclusive. The most valuable symbols depict whiskey, colts, cowboy boots, and other items that correspond to the theme of the Wild West. You can also see several special symbols on the playing field:

The Scatter symbol, represented by the image of a skull and revolvers, triggers free spins, which are available in several variants. This symbol is paid by itself (at the general rate), appearing in any cells.
The wild symbol in the form of bandits performs the function of a Joker or Wild symbol, which replaces other symbols, forming additional winning combinations. This symbol can remain on the screen for several spins.

The playing field of the Dead or Alive 2 slot consists of five reels with three symbols on each of them. The betting range is from $ 0.09 to $ 90 per spin. You can only place a bet on all nine payment lines. There is no doubling game. Winnings are calculated based on the coefficients shown in the pay table.
The RTP is 96.8%, which can be called an average and volatility is high as well. You can win up to 2,000,000 coins at most.

Bonus features in the “dead or alive2” slot 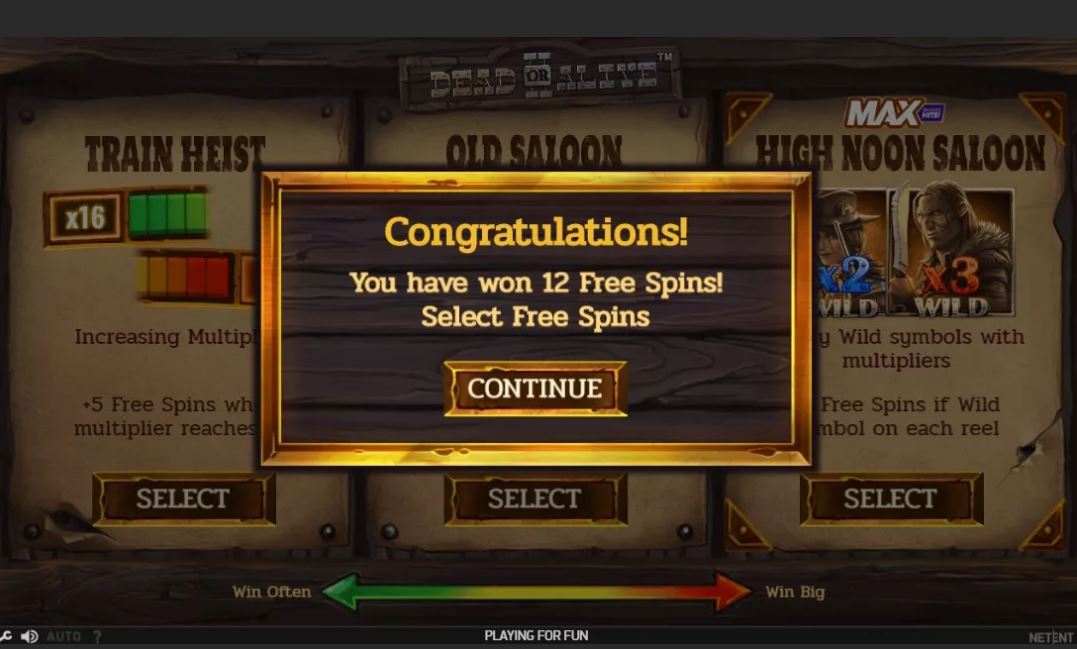 The game has several variants of the bonus round with free spins:

• Train Heist-an increasing multiplier, due to which payouts are constantly increasing. Each Wild symbol increases the multiplier by 1 with a maximum of x16. When the maximum multiplier is reached, their number is reset to zero, and the player gets five additional free spins;

• Old Saloon-a round with Wild symbols and x2 payout multiplier. When five Wilds fall out, the player gets five spins;

• High Noon-a round with additional multipliers. When two Wilds fall out, the x2 multiplier is activated. Three symbols activate the triple multiplier. This round allows you to win up to 100,000 coins.
When playing in free spins mode, the bet doesn’t change, and all rounds are played without the player’s participation.

1 thought on “Slot Dead or Alive2”