The Europeans have a Halloween. But the festival of evil spirits doesn’t compare in scope with the Mexican “Day of the dead”. The whole country is involved in the carnival. The main attributes: make-up celebrating the dead, candles on the roads from the cemetery, so that the dead could find their way home and human skulls made of sugar. They are broken and eaten. The action is accompanied by guitar music, incendiary songs and drinking alcohol.

The festive atmosphere was successfully conveyed in the Dia Muertos slot machine. The slot turned out to be even somewhat hooligan – skulls in free spins emit screams and make faces. And the animation of other characters is made with black humor.

Previously, you could only meet the souls of the dead while visiting the festival of the dead in Mexico, but now you can also play an exciting game on the new Dia Muertos device from Amatic. The main task of players is to collect as many prizes and gifts as possible before the departed souls leave the colorful Mexican holiday at midnight and return to their afterlife. 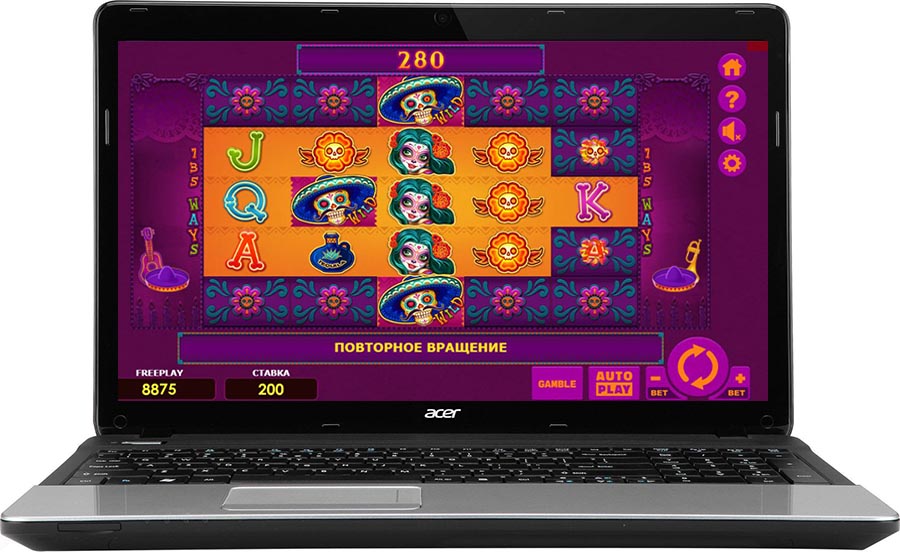 Among the symbols of the online slot:

The plot of the base game unfolds on five reels with 13 open symbols, which contain 45 winning combinations. After each win, there is a free bonus spin with a large number of open symbols and the best chance of winning.

You can feel all the generosity of the slot machine after five consecutive wins and passing five bonus spins, then all the fields will open before you, and the number of winning combinations will be more than 3000.

The skeleton of a deceased Mexican is the Wild symbol of this slot, it is always ready to replace any other image.

The mysterious process of playing on the Dia Muertos slot machine unfolds on five reels with an ever-increasing number of paylines (from 45 to 3125). The payout percentage of the device is 97.5%, which is very pleasing. The volatility of the slot machine is average.

Variable size playing field: the game has from 13 to 25 game cells. From a cross-shaped layout to a 5 × 5 square.
There are no paylines. The principle of building combinations is “in any position on neighboring reels”.
The number of “payment paths” is from 45 to 3125.

A large number of symbols of the Dia Muertos slot machine (11) shouldn’t frighten players: at least half of the playing time is spent on the increased field. With 18 or more cells involved, the payout rate is about 50%. The twelfth picture in the game is an unpaid Joker (wild). There are no Scatter and Bonus symbols.

The main role is played by the replacement symbol (wild) – a skull in a sombrero. The only function is to replace any other icons in combinations based on the principle of a wild card. The wild can appear two or three times on any reel and on all reels at the same time. However, the Joker cannot fall out in stacks.

All other symbols move along the reels not only one at a time, but also in groups, up to five icons.

Dia Muertos slot doesn’t have bonus games that take place on a separate screen.
There are two types of free spins:
• Respins up to five in a row with a gradual increase in the size of the playing field from 13 to 23 cells;

If the respin does not win, the free spins are terminated with an offer to increase the winnings in the risk game or take it away.