About seven years ago Microgaming company has gladdened the fans of its colorful gambling with an incredible video slot named Girls with Guns – Jungle Heat. Its main characters are girls from a special forces unit who went to the South American jungle to destroy a cartel of drug traffickers. A year later, their team again faced a new, no less difficult task. They must neutralize the criminals who are holed up in the snow-capped mountains. How successful their operation will be, you will find out by launching the free slot machine Girls with Guns II-Frozen Dawn.

Girls with Guns II-Frozen Dawn is a five-drum model with three rows of images on the screen, special symbols, prize rounds, free spins and other features that are discussed below in the review. 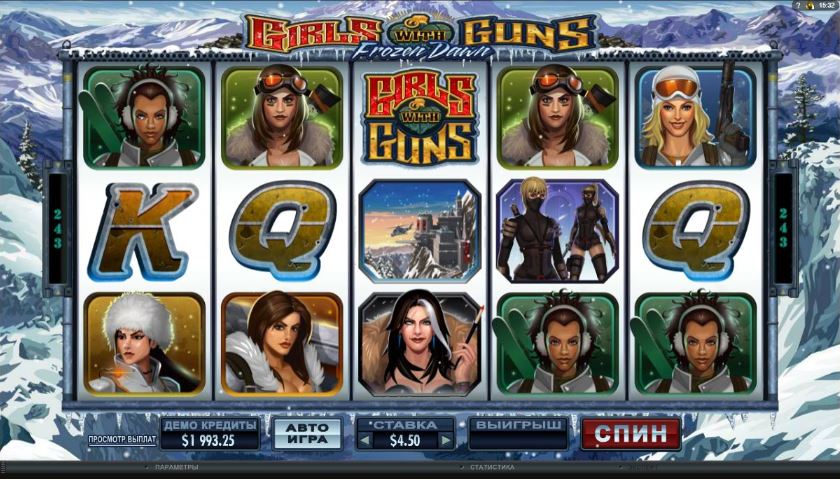 Playing this slot machine is possible by the bet in range from one to fifteen coins. Their face value can be 0.01, 0.02 or 0.05 dollars. The total bid is always a multiple of thirty. You can bet up to twenty-two and a half dollars on a spin.

There are no regular active lines in this video slot. Winning combinations are formed from identical images that appear in any position on the adjacent reels, starting from the first one. There are totally 243 ways of forming the paid combinations.

The payout amount is calculated based on the bid and coefficients specified in the rules. The table shows the winnings based on the amount bet per spin. There is no risky game of chance.

Playing the girls with Guns II video slot, you will meet the soldiers of the women’s special squad. Their names are listed in the coefficient table. Other themed images and playing card denominations from ten to ACE are also shown on the reels.

The slot machine also has several special symbols with advanced features. These are Wild (game logo), Special Wild (all team members) and Scatter (space satellite). Let’s look at their functions:

After any unsuccessful spin of the reels, the bonus game may start. One of the girls will appear on the screen and start shooting at the symbols on the reels. You need to select a goal. It will hide the bonus payout, which depends on the bet on the spin and is finally calculated randomly.

The video slot is a worthy continuation of the first part of the game. It is designed in the same style, has no less high-quality graphics and even more interesting features. It is nice that it is Russified and runs not only in the downloadable version. In short, this is another very high-quality and exciting model of the famous brand.