NetEnt has released a Hotline slot machine, stylized as a ninety’s TV series. It will take you to Miami at the end of the twentieth century, where your companions will be colorful characters with huge cell phones and shiny guns. Apparently, they intend to rob a jewelry store where luxury jewelry is presented.

In addition to the unusual theme, the game will surprise you with original gameplay features.

The game takes the user to Miami in the 80-90s, when bandits tried to rob jewelry stores for valuable jewelry. The slot contains the best features of classic one-armed bandits — high quality, exciting and unique gameplay, as well as a lot of bonus features. 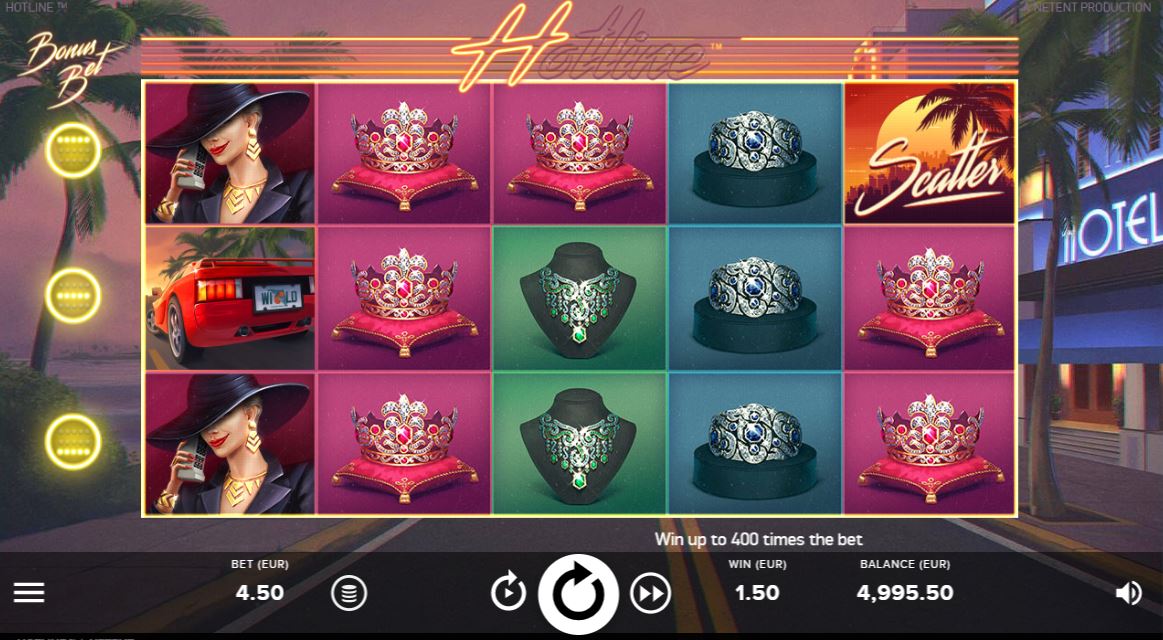 Before you start playing Hotline slot, you can watch a short video that tells the story. It’s tied to a robbery during which bandits stole a gold crown and a diamond necklace. Of course, there was a woman who made cunning plans.

The standard control panel is used for starting spins and setting up bets, which is familiar to everyone who has at least once spun the slot reels.

All symbols of the Hotline slot machine are drawn very carefully. The main characters are a guy in a white suit, a dark-skinned bandit and a woman in a hat. In addition, you can see different jewelry, cars and the evening landscape on the reels of the slot. Many symbols are highlighted with neon. Special attention should be paid to the musical accompaniment. It is perfect for the gameplay and makes it more enjoyable.

There are five reels on the playing field with three rows of symbols on each of them, as well as 30 paylines. You can’t change their number, but the size of the bet on spins varies quite widely – from 0.15 to 150 dollars. This range of bets will equally please both those who don’t like to take risks, and those who like to play big.

RTP is 96.7%, which is very good, especially considering the average level of variance. In the long run, the slot will give out small winnings, but quite often.

Playing the Hotline slot won’t be able to break a large jackpot, but its functionality provides several bonus features, each of which will help you get even more benefits when playing for money.

The image of a red car that appears in any cells acts as a Wild symbol. It can replace any normal symbols (but it can’t affect the scatter symbol) and expand by several cells. The symbol with the image of the evening landscape is the scatter symbol. Appearing on odd reels, it will trigger a free spins round.

In addition, the game has other bonus features. For example, if the bet is 15 or more coins, one hotline is activated. After repeated bonus bets, additional lines can be activated and paid for each spin. When a special symbol appears on the hotline, the “wild” symbol will expand while remaining in place, and a second spin will be triggered on the other reels.

If three or more scatter symbols appear, the player will get seven free spins with expanding and sticky Wild symbols.

Let’s take a closer look at the features of the video slot’s prize features: