Developers from EGT have released an exciting slot machine The Story of Alexander, dedicated to one of the greatest generals in world history, Alexander the Great. You will see the legendary king and his entourage, go on a campaign with his army and fight for large payments, accrued in this model in different ways.

The video slot The Story of Alexander has five reels with various symbols. You can use one, ten, twenty,thirty, fifty or one hundred active lines, which are allowed to place equal bets: one, two, five, ten or twenty coins per line. Check the acceptable cost of chips directly at the online-casino.

Images on the screen are arranged in a 5×4 pattern. The set of offered game options consists of simple images, scatters, jokers, free spins with bonuses, cumulative jackpots and a double round. 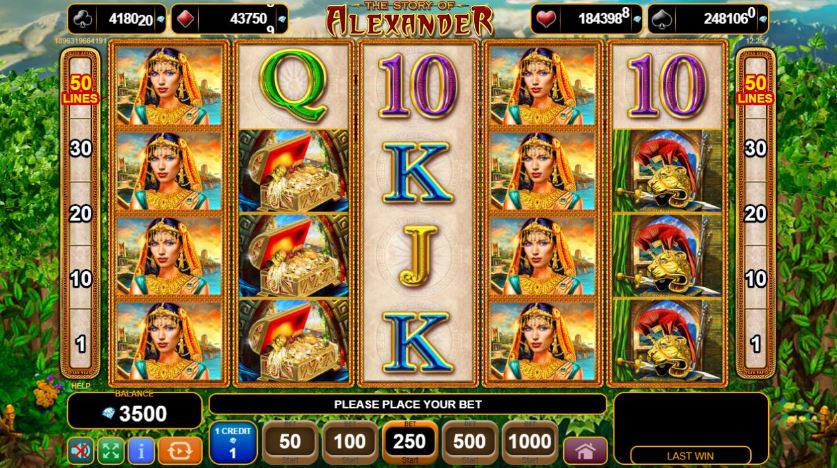 Standard icons make up winning chains only from left to right on active lanes. Required from two or three identical elements that should be next to each other. The payout is calculated only for the highest combination of any position.

The video slot is available in many languages, but the interface is clear in any version.

A new spin starts by clicking on one of the five buttons corresponding to different bet levels. You will also have to choose the chip value.
Automatic mode is started without any additional settings and is valid till switched off manually. You can adjust the sound parameters and screen size in the slot.

The calculation of winnings is based on the line bet and the coefficient of the established sequence, which in the Story of Alexander is from X3 to X250. These parameters are multiplied by each other, and for multiple combinations in the same round, the credits are added together.
You do not have to participate in the game for doubling. If you decide to take this step, you will have to guess the color of the closed card. The creators of the game presented on the reels of the video slot The Story of Alexander card denominations from nine to ACE, a chest of jewels, a war elephant, various elements of Legionnaires ‘ equipment, the main character and his companion.

Images can appear in columns in long vertical stacks, which often leads to the formation of numerous combinations in a single spin.
Special characters are also involved:

There are prize spins in The Story of Alexander slot machine :
Free Spins – for ten runs, the game is played on the money of the institution at the last bet and the number of active lanes. Jokers here are “sticky” and remain in their positions until the end of the draws. The scatter in the first column gives five more free spins. They can be renewed in this way only once.

You don’t have to worry about learning the rules of free spins. They pass automatically.

In the Story of Alexander, traditional EGT jackpots are played, named after the suits of playing cards. You can fight for them in a special round, which is launched in a randomly selected spin. The higher the bid, the more likely it is to start.
Twelve cards appear on the secondary screen. You can open them in any order. You will turn over the cards until you collect three identical suits. This determines which progressive jackpot you will get.

Video rewiev for “The Story of Alexander”

1 thought on “The Story of Alexander”